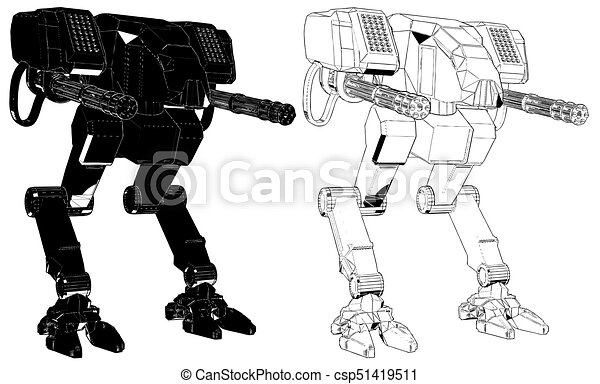 When below half wounds:
Eradicator barrage volley
Make an attack against the person who triggered this event or following attention by Designating one square within sight no more than 2 squares away from the target. Every creature within 4 squares from the designated square takes damage equal to the highest ability score[4] of this creature. Damage is halved by making a Nim+Athletics TN10 check to duck for cover. Damage cannot be armour piercing and can be absorbed and converted by armour.

Meta notes:
The Eradicator MK.ll Patrol Bot is an autonimous weaponssystem. A converter Warbot was used as a heavy duty patrol unit. Armed with heavy weapons and missiles, this Patrol Bot is quite capable of killing a small group of Humans or atleast mortally wounding them. With it's automatic absorb value and high wounds, this is a very dangerous opponent when facing it with normal weapons.

It's clear drawbacks are it's very small Fatigue pool and the fact that it's Slow. This makes running away from it a viable option when fighting it is imposible. It also has a clear weakness that can be exploited. When EMP granades or weapons are used to deal damage, this will directly bypass the armour and auto absorb + deal extra damage and sap it's fatigue pool.
What? Magic skills? You just need one: Chronomancy...
Maybe Chronomancy AND Pyromancy ...

Chronomancy though <3
Nah. Who am I kidding?
Chronomancy and Illusion.

Really like this. It packs a real punch, has good damage soak, but smart play can turn the tables real fast on this one. Head-on punching won't do you fast enough to not get hurt, especially when the group is in the 3-region of things, but there's many ways to exploit its small fatigue pool and relatively short range (size 1 creature, with one-handed autopistol gattling set (inferred from picture)).

A really good 'Prey' encounter! Clever hunters can take it down, just don't try fighting it.
In Dreams we Trust.
Top

; Sure,let me me check what I have available,may only have a set of seconds in the bolt on left,probably make some more sets later this winter,I will email you ASAP?  Thanks

Return to “The Flesh Forge”